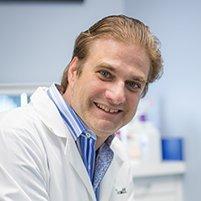 Having healthy-looking toenails is important for your self-esteem. At his Downtown Brooklyn, New York, office, Dr. Cooper offers the state-of-the-art Keryflex system to cosmetically restore nails that have been damaged as a result of fungal infection, nail dystrophies and trauma.

Keryflex is a special nail restoration system that uses resins and activating agents to craft a natural-looking artificial nail that's just as durable as a “normal” nail. The application can be performed in Dr. Cooper's office in less than half an hour.

How does Keryflex work?

Keryflex is a cosmetic application helps restore the healthy appearance of a nail that's been damaged by trauma, fungus or disfigurement. Its special formulation allows the new nail surface to be hard and durable, yet remain flexible enough to move as your foot moves so it doesn't crack or feel uncomfortable when walking.

First, the nail surface is prepared by “debriding” it – removing some of the surface material to enable the Keryflex solution to adhere better. After the nail surface is prepared, the Keryflex resin solution is brushed onto the nail in layers. Once the desired thickness is reached, the nail can be gently shaped to achieve a natural appearance that blends in with the other toes. A special sealing agent is applied, followed by a layer of a special bonding agent, and finally, the nail is buffed for a natural, healthy appearance. An ultraviolet light is used to cure and harden the nail between steps and after the final step. The entire procedure takes less than 30 minutes to perform.

Can I use nail polish on the nail after it's been treated?

Yes, it's perfectly fine to use both nail polish and nail polish remover on a nail that's been treated with Keryflex.

How often will I need treatment?

The time between treatments can vary for each person, but in general, reapplication can be performed within six to eight weeks.